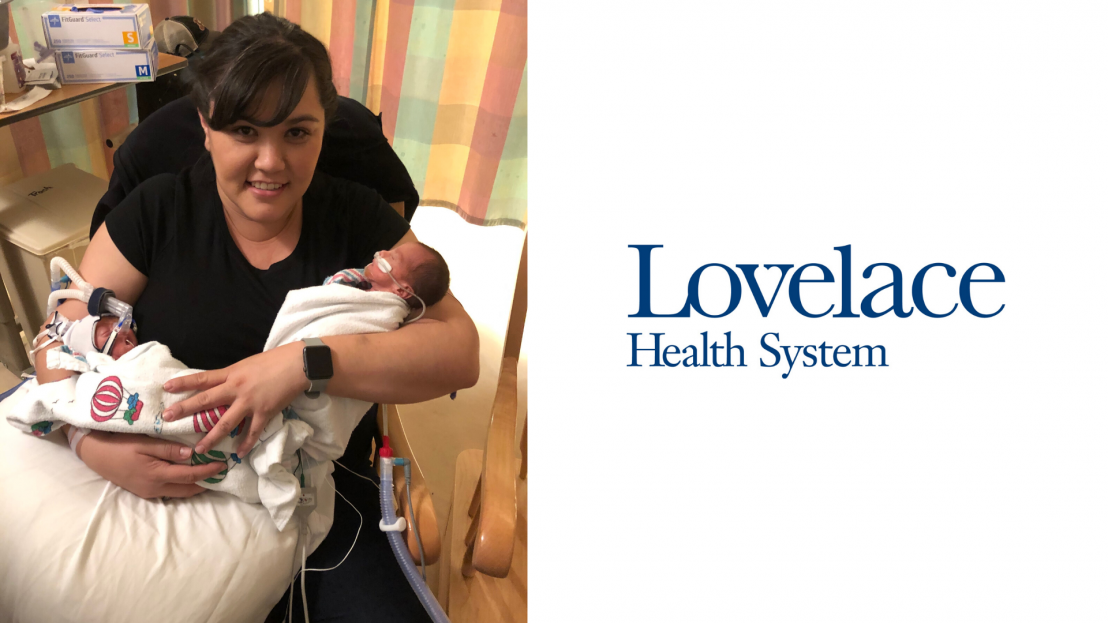 This year Alysia Martinez got that happy news that her family was going to be growing, however it was by one more than expected. Martinez found out she was having twins.

“Both my side and Daddy's side have a history of twins. When I found out I was pregnant I was very much surprised,” says Martinez. “His dad is a father of twins, his aunt has a set of twins and my grandmother had a set of twins.”

These twins came as a shock, but Martinez had a fairly good pregnancy without major issues. She kept up with her appointments at the midwives and physicians at Lovelace Westside Hospital who made sure she was on track. Martinez checked out as healthy throughout her pregnancy and kept on working.

Although she was doing well, you cannot avoid everything. Martinez got a stomach bug which caused her to become dehydrated. She stayed home a couple of days from work but also started to have pressure pains. The pains were continuing the next morning so Daniel, her partner, brought Martinez to the hospital. She was told at Lovelace Women’s Hospital that she was dehydrated and that she needed medication to stop the pains, which turned out to be contractions. She went home that day but the contractions came back and were causing a lot of pain, so she returned to the hospital.

After several days, her twin boys decided they were ready to enter the world. They were 12 weeks early.

Both became breached and a C-section was performed. Labor can be a distressing time for any mom, but Martinez knew she had done all she could for her little Thomas and Joseph.

“I left it up to God. I prayed,” says Martinez. “I knew I was healthy. All the ultrasounds were healthy; none of the doctors had concerns. I left it up to God and the doctors. We had to go with the flow. I didn't know what was going to happen. We took it day-by-day. When things were coming we just addressed it then.”

Both boys needed time in the NICU to get stronger before they could go home. Martinez had to do the hard thing and go home without her little ones.

“It was one of the hardest things I've had to go through, to have to leave the hospital without my babies. The first few days were really hard,” says Martinez. “I went to the NICU every day, several times. Several hours just to be there with them until the day they came out.”

After a little over two months in the NICU, Thomas was ready to go home. However, little Joseph needed more time in the unit.

“That was hard. I wanted then both home of course,” says Martinez. “With one being home I just couldn't be at the NICU as I was previously. Timing was harder and making sure the baby here at home was taken care of so I could go see Joseph in the NICU.”

During this time Martinez had to rely on a good support system. She counts herself blessed to have Daniel, her mom and the staff at Lovelace to help her through this tough journey.

“Since the very beginning the staff has been great for me. From the nurses to the doctors the patient care techs - they've all been great with us. From labor and delivery, down to post-partum all the way to the NICU, they’ve all been great,” says Martinez. “They've all been there to answer any questions and make sure I’m ok. All the nurses were making I was ok mentally and emotionally.”

Luckily they only had to spend a week apart. Joseph became stronger and was able to be with the rest of his family. Martinez is happy to have them together and loves spending time bonding with them, even if she’s had to sacrifice a lot of sleep.

“They've been good and happy,” says Martinez. “It's wonderful and I’m so blessed to have them home and get to spend time with them and bond with them and enjoy them.”