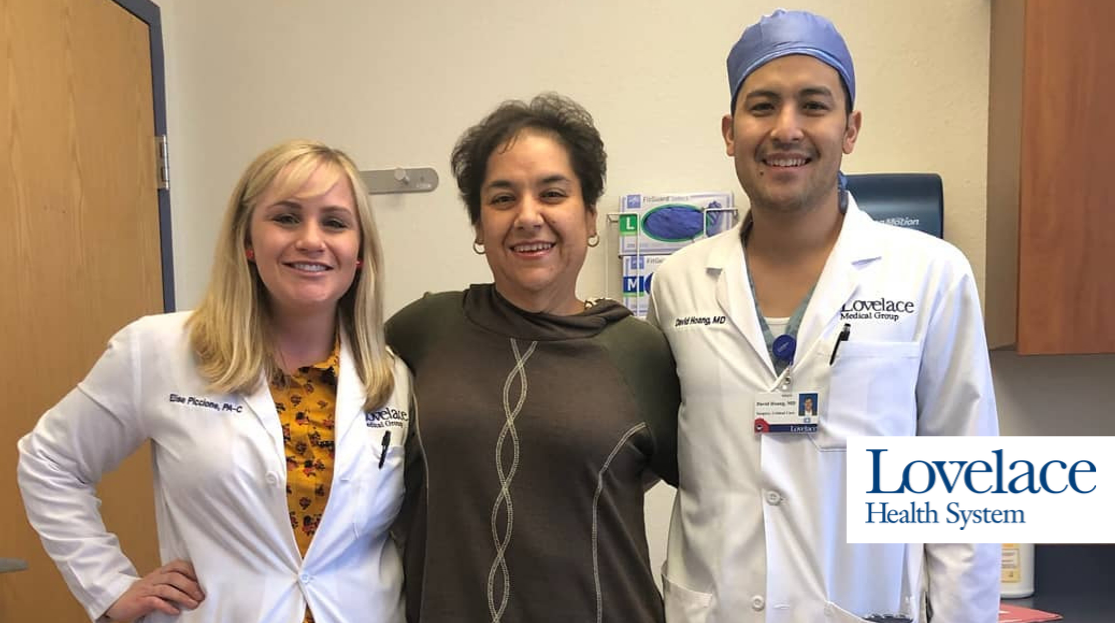 “It was the worst stomach ache I have ever had,” said Duran, who was at her niece’s gymnastics meet when she began experiencing excruciating abdominal pain. “I didn’t know where the pain came from. I thought I caught the stomach flu a week earlier, so I thought it was that still.”

At the hospital, doctors told Duran she had severe acid reflux and she was sent home with painkillers. Duran decided she would schedule an appointment with a gastroenterologist once she returned from a planned vacation to Georgia.

Her vacation took a turn for the worst when Duran’s stomach pain returned. This time, the pain was even more debilitating. “I was doubled over and couldn’t move,” Duran explained.

Returning home from her trip, Duran went directly to the hospital from the airport.

“Lovelace did surgery within 24 hours,” Duran explained. “I was told if I didn’t have surgery right away, I would probably die because my pancreas was necrotic and totally gone.”

“During surgery, they discovered my gallbladder had released a gallstone into the pancreas and it had made my pancreas necrotic. It was kind of like the perfect storm.”

Duran remained at Lovelace Medical Center until she was discharged in June 2018.

“I had the greatest experience at Lovelace. The nurses were amazing. Everybody down to the janitorial staff was extremely nice.”

Duran returned for her last surgery in November 2018. Dr. Hoang removed Duran’s gallbladder, cut out scar tissue from a skin graft and closed her stomach.

“Dr. Hoang and his staff were amazing. He and his physician assistant, Elise Piccione, would check on me on a regular basis throughout this whole experience. They became like family.”

Since her last surgery, Duran is healing well and returned to working full-time in January of this year.

Looking back, Duran is happy that her journey led her to Lovelace.

“It has been an unbelievable year but I just feel blessed to be alive,” Duran shared.

“I felt blessed to leave where I was and go to Lovelace. I was in that initial hospital for 19 days and nothing was done.  Within the 24 hours that I got to Lovelace, they pulled me into surgery. I am always recommending Lovelace for surgery.”