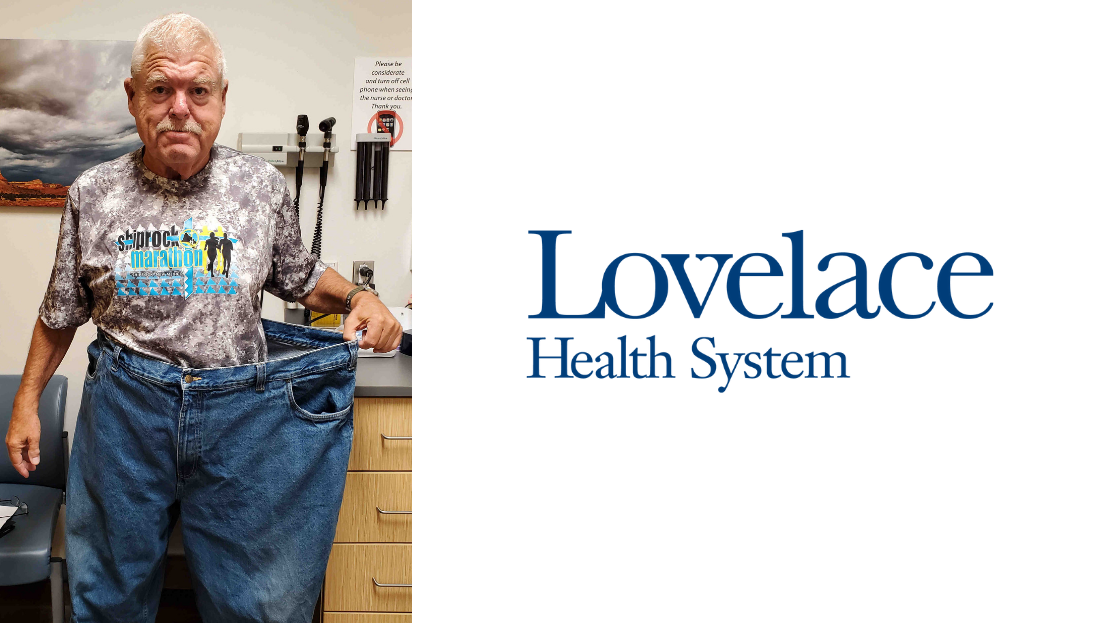 Twenty years ago, Wesley Jones, Ph.D., was diagnosed with type 2 diabetes. Jones was told at the time that it was not reversible.

Jones began to gain weight, about five pounds per year. Diets recommended by dietitians didn’t seem to help. “I was told to eat the standard American diet,” Jones said.

Exercising was too strenuous for Jones, who began using a walker.

“I could not walk even across the street. I figured that I only had a year or two left to live,” Jones said. Jones weighed 275 pounds.

In October 2018, the 72-year-old and his family moved to New Mexico, unaware that his health would soon change for the better.

Shortly after arriving to New Mexico, Jones was introduced to Lovelace. “I got a brand new set of people on ‘my’ team,” Jones explained.

“Dr. Bhalla told me that type 2 diabetes can be controlled, which was news to me,” Jones said. “Prior to this, I had this attitude that my condition was progressive and nothing could be done.”

Through independent research, Jones learned the impact of nutrition on diabetics. And so, he decided to try his own healthy version of a high protein diet, combined with intermittent fasting and consistent exercise.

Two weeks into his new journey, Jones lost 15 pounds. He didn’t stop there.

In seven months, Jones had lost 100 pounds. Wesley’s body mass index (BMI) decreased from 44 to 27 and he lost 14 inches off his waistline.

“I weigh the same as when I was in high school, more than 50 years ago,” Jones said.

Jones has made incredible progress in all aspects of his health.

“Instead of being exhausted by trying to walk 50 feet, I now walk a 5k every day with my dogs,” Jones said. “I feel strong.”

Jones no longer has COPD, arthritis or internal inflammation. His insulin resistance and neuropathic pain in his feet have greatly improved and his kidney function (eGFR) has risen from 42% to 55%.”

“I certainly would’ve been put on kidney dialysis if it weren’t for these changes,” Jones said. “It was important for me to do this in a slow progress. I had many small successes along the way.”

Wesley’s son, a five time Ironman athlete and avid marathon runner, has been a motivating factor throughout Wesley’s journey to better health. “He has definitely been a motivation. His resting heart rate is 42,” Jones laughed.

Jones is appreciative of the guidance and care he received from his Lovelace Medical Group providers.

“Both of my providers are incredible,” Jones said. “I got the luck of the draw with Bhalla,” Jones explained. “He is extremely educated.” Dr. Bhalla worked with Jones to safely come off multiple medications.

“My medicine out-of-pocket costs are currently about 10% of what they had been before working with people at Lovelace,” Jones said.

With the help of Rachel Cunnick, PA-C, Jones was able to get a FreeStyle Libre, a continuous glucose monitoring system.

“Getting the monitor was a fight and I really appreciate Rachel and her team’s help in getting me that monitor. When I finally got the Freestyle Libre, I told myself that I wouldn’t let this go to waste and do the best I can with it.”

“The device helps me understands how much of an impact my diet and exercise have on my body,” Jones said.

“I am extremely proud of Wesley,” Cunnick said.

Jones hopes that other patients with similar health struggles learn about his success. “You really have to change the way you live. Get educated and take responsibility.”

Talk to your doctor before starting a new diet or exercise routine. To schedule an appointment with a Lovelace provider, call 727.2727.