How One Breast Cancer Survivor Overcame Her Diagnosis 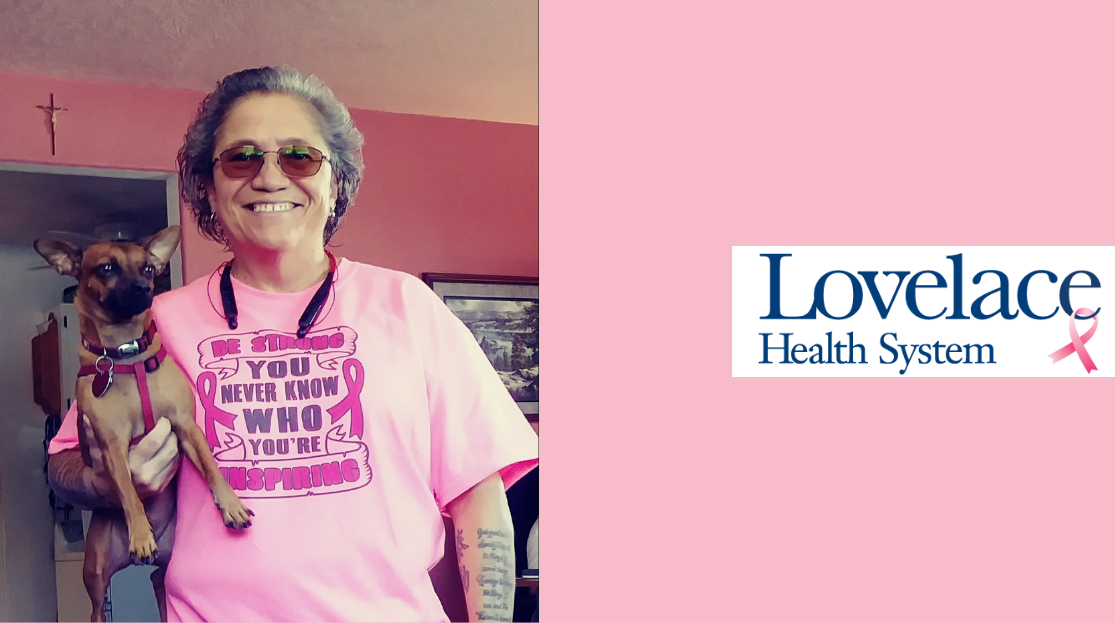 Bernadette G. was never a fan of doctor’s offices or annual check-ups and vowed to avoid them whenever she could. But, when a close friend was diagnosed with breast cancer, she began to prioritize her health, taking proactive steps by regularly performing breast self-exams at home. Shortly after getting into this new routine, Bernadette became anxious as she noticed a small, marble-like lump on the lower part of her left breast.

After telling her family and a few close friends, the same friend who originally inspired Bernadette to be more conscious of changes in her body quickly referred her to Lovelace Women’s Hospital.

Bernadette met with an oncologist at Lovelace and a biopsy confirmed her fear – on February 12, 2018, Bernadette was diagnosed with Stage 2 breast cancer.

“Just hearing the word ‘cancer’ freaked me out because my father passed away from kidney cancer,” Bernadette said. “But ready or not, I had to figure out a treatment plan. My friend that was diagnosed with breast cancer before me, referred me to Lovelace and said that the doctors, nurses and other staff were fantastic, so I went for it.”

One of Bernadette’s biggest worries with treatment was losing her hair. She admits, “the hardest part of having breast cancer was the fact that I was going to lose my hair. A girl’s hair is everything.”

Despite efforts to avoid chemotherapy and preserve Bernadette’s hair, when Dr. Calvin Ridgeway went in to perform surgery and remove as much of the cancer as possible, he learned it had spread. He needed to remove 14 lymph nodes and change her diagnosis to Stage 3 breast cancer. Additionally, her new treatment plan would include eight chemotherapy sessions and 30 radiation treatments.

During the course of treatment, Bernadette did ultimately lose her hair, but she found positive resources to help her cope and come to terms with her new reality.

As she was grappling with this obstacle, another one was coming her way. This time it came in the form of financial burden.

“When I got diagnosed in 2018, I had just started a new job and had not met my deductible, so I needed to come up with the money for my surgery, bills and other expenses,” Bernadette said.  “I was advised by a navigator to apply for the Anita Salas Memorial Fund. I applied and received the funding which helped pay for some of my bills. This was great because now I didn’t need to stress about the financial part and I could just concentrate on getting my health back in order.”

In addition to the financial support, Bernadette found Lovelace’s Healing Touch therapy program to be a helpful tool during her treatment.

“The Healing Touch therapy, here at Lovelace, is another program that I am fully vested in,” Bernadette proclaimed. “It’s an energy-based therapy which helps me relax and helps my body, mind and spirit. The therapist asks me about my stress level and what my intention will be for my session. For example, I would say I need help to let go of things, or I need help getting grounded again. And that’s what the therapist would work on. I love it!”

Along with the resources at Lovelace, Bernadette attributes her recovery to her positive attitude, and added, “Attitude is very important. You bring the attitude, but a caring team is important, too. I would recommend Lovelace to everyone!”

Bernadette is a breast cancer survivor who wants to help others survive this disease. Call 505.727.6900 to schedule your mammogram today.