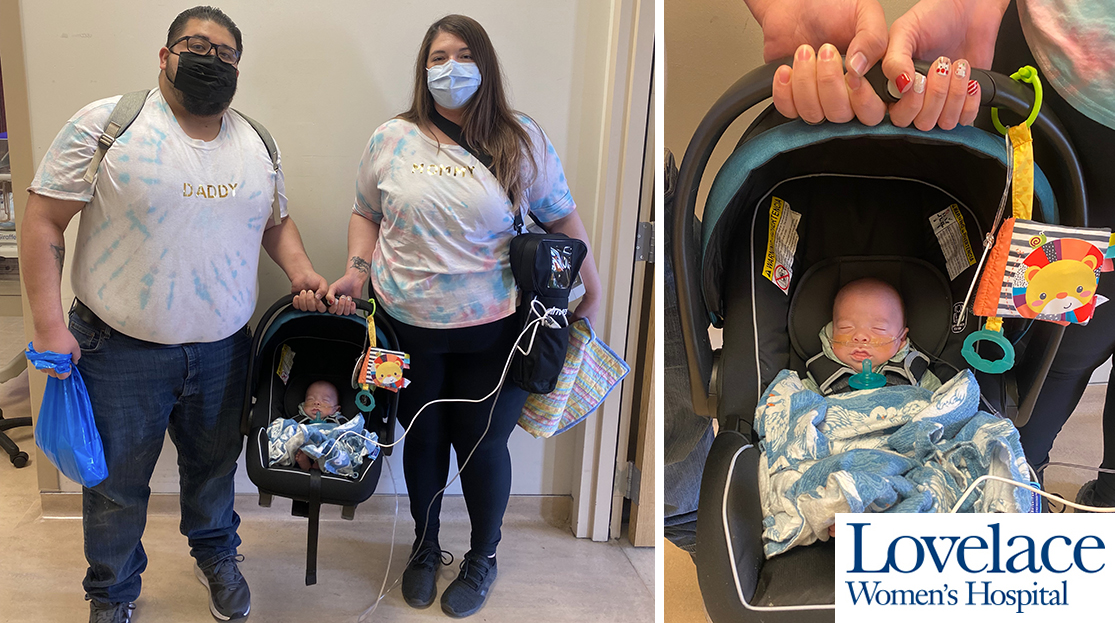 When Annayisa and Michael Sanchez found out that they were pregnant with their first child, they were excited to start preparing for the baby’s arrival. The Rio Rancho residents put together a new baby bed, placed it in the nursery and decorated the room with bright colors and children’s books.

A normal gestation period for a baby is roughly 40 weeks, which meant that their baby’s due date was at the end of November. However, halfway through her second trimester, Annayisa started showing signs of concern.

“The membranes around the baby were getting thinner and the amniotic fluid was slowly leaking,” Annayisa said. “The doctor put me on total bedrest so that I could keep the baby inside as long as possible. If I could get to 23 weeks, the plan was that I would go to the hospital and continue bedrest there.”

Their baby, however, had other plans.

On the morning of July 21, just 22 weeks and 1 day into her pregnancy, Annayisa started feeling pain and noticed some bleeding.

“I called the on-call nurse and she advised me to get to the hospital right away,” she said. “Michael called his mom and I called mine. We were both sad and crying because we knew that our baby’s chance of survival was very low.”

“After I delivered him, I saw his arms and legs flailing all over the place. The doctors told me that he did cry as he came out, so for a 22-weeker, that was really good.”

The doctors immediately inserted a small tube down Jiraiya’s throat to give him a steady flow of oxygen to breathe, since his lungs were far from being fully developed. He was placed in an incubator in the neonatal intensive care unit (NICU), where he was monitored around the clock.

Unfortunately, even though the incubator was best for the baby, it was hard for Annayisa. She visited her baby every day and Michael visited when he wasn’t at work as a water engineer.

“There was a time when I got sick with a respiratory illness, so I stayed away because I didn’t want him to catch anything. When I did go, I would talk to him and touch him through the incubator. Eventually, he grew to the point where I could pick him up and hold him without assistance. From then on,” she said, “I was holding him whenever I could.”

As with many premature babies, many health issues arise because the baby is so small and underdeveloped, such as:

Through it all, Dr. Zuzana Novak kept the couple well-informed about Jiraiya’s condition in the NICU.

“Dr. Novak was very thorough when explaining things and helping us stay positive. She is amazing. I couldn't have asked for a better doctor,” she said. “The entire staff at Lovelace was wonderful. It was like we created a family there because they were so supportive. There were times when we were down, but they were there for us and kept us positive. Even when I wasn’t at the hospital, I had no worries about his care because I knew he was in great hands.”

Finally, on December 6, almost 4 months and 2 weeks after he was born, Jiraiya went home. But even though technically he was 4 ½ months old, he was only 1 week beyond his expected due date.

Later, Annaiysa provided an update. “Yes, technically he’s almost 5 months old, but development-wise he’s just a month old. He looks like a newborn baby. When babies who were fully developed at birth get to be 5 months old, they are bigger, more alert and are starting to play with toys. Jiraiya is barely getting to that stage,” Annaiysa explained.

Fortunately, the couple has family members close by to help out around the house. “My parents live here in Rio Rancho and Michael’s mother lives just out of town,” she said. “It was a little scary because they’ve never had a baby that was so early, let alone a baby who is on oxygen. He also has connections to a heart monitor, which shows a readout of his heartbeat, and a pulse oximeter, which shows how well oxygen is getting into his blood system.”

When at home, Annayisa tends to her baby’s daily needs. “He typically feeds every three hours during the day,” she said. “At night, sometimes he wants to eat every three hours, other nights he will go five to eight hours before feeding.”

She feeds him a high-calorie formula through a bottle. Jiraiya’s primary care provider is very happy with his weight gain, so her son may go to regular formula soon. “His doctor was amazed that he picked up bottle feeding so quickly. I am happy with his progress, even though I never got the opportunity to breastfeed him because he was so premature.”

When her baby is not feeding or sleeping, she plays with him and often lays him on his stomach for ‘tummy time.’ “This was highly recommended for him so he can start using his neck muscles. The more he uses them, the faster he’ll be strong enough to hold up his head.”

Still, after all they have been through, 27-year-old Annayisa and 28-year-old Michael want to grow their family. “We have decided that we want at least one more child. How many more depends on how the next one goes.”

By then, Jiraiya may be a walking, talking 2-year-old, running around and getting into trouble.

“We are looking forward to that!”

For more information on Lovelace Women's Hospital's birthing services, visit our web page or call us at 505.727.7677.