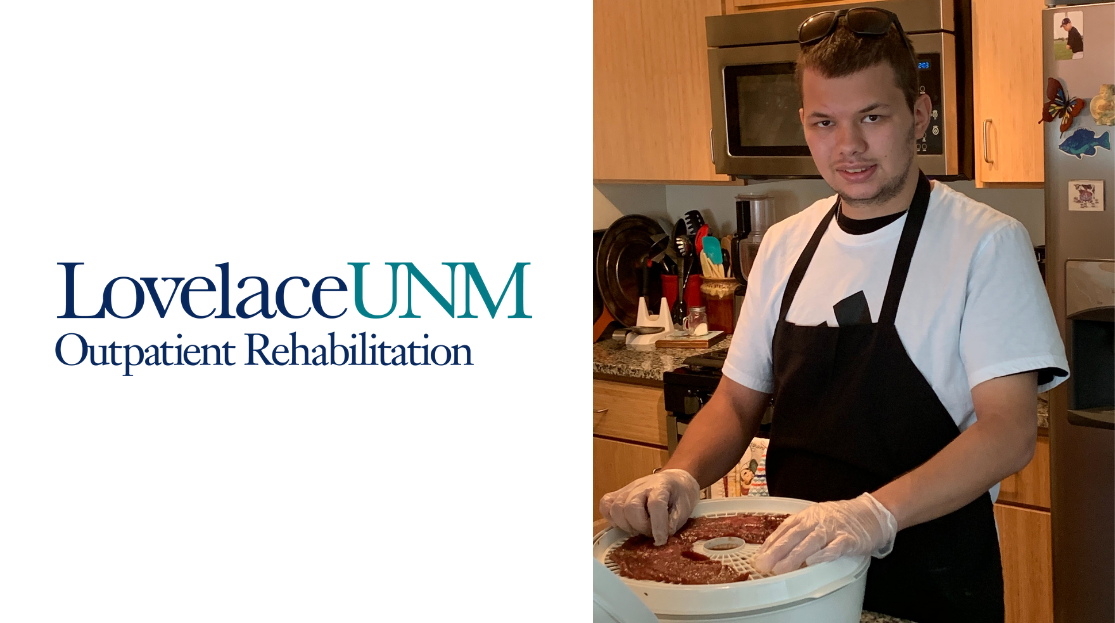 On August 2, 2020, Brandon Esquibel was going to meet a friend when the unthinkable happened: he had to make a split-second decision when a truck was barreling toward him from behind as he was approaching a red light on his motorcycle. Brandon knew he had two options: get slammed by the truck or speed through the red light hoping he’d make it to the other side of the road safely. He took a shot crossing the intersection and collided with another vehicle.

“I think knowing how to ride a bike saved my life,” said Brandon. “I popped a wheelie and was able to veer to the side slightly, but once I hit the car I was knocked out.”

Brandon woke up at the hospital after being put in an induced coma for two weeks. He was diagnosed with a traumatic brain injury (TBI) and told he’d need to stay in the hospital for at least two and a half weeks.

“My stepmom Jillian works with the neurology department at the hospital, so she always had people coming to check on me,” said Brandon. “There was always somebody around that I was familiar with that put me at ease when my parents weren’t there with me.”

He was then transferred to Lovelace UNM Rehabilitation Hospital, where he stayed for a few days before being discharged for outpatient care.

“My dad was my caregiver,” said Brandon. “I didn’t have a nurse or anything at the house. It was my dad helping me when I was home.”

At home, his father, Jason Esquibel, was charged with monitoring Brandon, taking him meals and helping him shower. It was a lot to take on, considering Brandon needed to learn how to walk, talk, eat and dress himself all over again.

Brandon participated in outpatient physical, occupational and speech therapy to regain the skills he’d lost in the accident.

After a long and trying seven-month journey of recovery, Brandon graduated from his therapy program and says he’s doing very well. He’s back to work as a chef at a local restaurant and says he hasn’t experienced many lasting effects of his injuries.

“My tremor bothers me from time to time, and I’m a little more laid back now, but I’m able to do all the things I was able to do before the accident,” said Brandon. “Almost everyone I’ve seen online or on social media that has a TBI is either in a wheelchair, can’t talk or has to have round-the-clock care. I’m grateful that I can do things with my TBI that others can’t. I can sit in front of my TV for hours and play video games. I can eat, I can write, I can wash myself, I can wash my clothes, I can clean – there’s nothing different about me since I’ve recovered from the accident with the help of my parents and my therapists.”

The prognosis was grim, but Brandon defied the odds. His therapists even called him a “miracle” based on his recovery and his eagerness to get better. Brandon believes his can-do attitude and willingness to work with the therapists largely contributed to his successful recovery.

“We’re stunned at the progress Brandon has made,” said Jason. “It’s hasn’t even been a year – it’s been about seven months – and the doctor told us it was going to take six months to a year for a full recovery. For what they showed us happened to him and his brain and seeing him like he was in the hospital, I’m astonished he’s made this sort of a comeback so quickly.”

Brandon has resumed normal activates like going to work, listening to music, socializing with family and cooking – and he says none of it would be possible without the help of his therapists, Nisu, Emily, Donna and Mindy.

“I made a complete 360,” said Brandon. “I had to relearn how to do everything and I’m proud of myself and my therapists – together we’ve come a long way.”